I have a good friend who I’ve known for about 25 years who died the other day after losing a long bout with cancer. He won the early rounds, but ultimately his opponent wore him down and bested him. I’ll be attending his service later today, and I know it will be a mixed-emotion day, with lots of tears and lots of laughter – tears of grief and the laughter of remembrance. He was not much older than me, which at my age means that he died far too young. But he has a large and loving coterie of family and friends, incredibly supportive of each other, all who will ensure that his wife and children come away with far more positive than negative emotions. They are not having a religious service, but if they did, and they had asked me to give the sermon, here is what I would have said:

END_OF_DOCUMENT_TOKEN_TO_BE_REPLACED 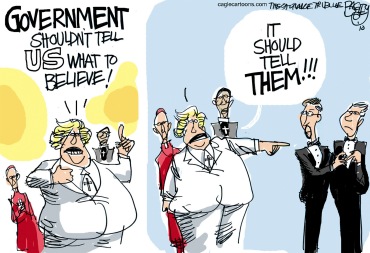 You know. That New American political movement that is so against big government. The one’s that want government to stay out of our business. Shouldn’t they be rushing in to save the day in cases like this?

END_OF_DOCUMENT_TOKEN_TO_BE_REPLACED

You thought this would be another anti-religious diatribe about free will, didn’t you? Sorry to disappoint you. As a lawyer, I feel this one is important.

Shades of Schiavo! Remember her? In Delaware, a case that presents deja vu overtones is in the beginning process of working its way through the courts. It seems that Lauren Marie Richardson took a heroin overdose back in August of 2006, but survived. Or at least her body did. Her brain was irreversibly damaged, leaving her in a persistent vegetative state, according to her doctors. Her parents, who have been divorced since she was young, are in disagreement about her future. They went to court to obtain Guardianship rights, which would include the right to make decisions about her medical care. Even though Lauren didn’t have a Living Will, she had told her mother, and others, that she would not want to be dependent on artificial life support if she was ever in the same state that Terry Schiavo was in. Dad says he never heard such sentiments from his daughter, and he wants to be her Guardian, so he can take care of her. The court appointed mom as her guardian, and since mom feels she should have her feeding tube removed, it will probably happen, once the appeals are over.