Now, don’t respond to this by pointing out leftist hypocrisy. I know that a little human hypocrisy is inevitable. I’m even sure that you could run through 480 or so posts I have here on my blog, and find some minor instance where I exhibit hypocritical tendencies (though I feel confident there is nothing major).

But for sheer and utter, almost jaw dropping hypocrisy, you usually can’t beat the right. Or the religious. Or both in tandem, which they often tend to be. You know, those people who love to wrap themselves in the flag and carry a cross. The most recent instance where I found my chin scraping the pavement was recently when Ted Nugent (anyone here remember the Amboy Dukes, BTW?) proclaimed at an NRA event

“It isn’t the enemy that ruined America. It’s good people who bent over and let the enemy in. If the coyote’s in your living room pissing on your couch, it’s not the coyote’s fault. It’s your fault for not shooting him.” …“If Barack Obama becomes the president in November, I will either be dead or in jail by this time next year.”

He went on to say that the voters ought to chop the administration’s heads off in November.

Now, I didn’t abrade my chin skin at what Nugent said. I’m not one who actually thought he was making a direct threat on the President’s life, even though he was talking to a bunch of gun-toting, weapons-loving aficionados who might have interpreted it that way. It did sound like he was predicting that he would do SOMETHING stupid if Obama was elected, that would be criminal in nature, and/or result in him being killed in the course of some overt violence directed towards someone he was pissed off at come November 6. And it certainly sounds like that person is President Obama. But he didn’t actually say it was the President, so I’ll give him a pass for mere vitriolic rhetoric given the audience he was addressing.

And I’m a firm adherent to the1st Amendment. I have absolutely no problem with him saying the most vile things about his President. I really don’t care. His opinions have already been shown to be based on vacuous, paranoiac, swinging dick syndrome, so they bounce off the wall and fall to a heap, easily ignored and swept into the garbage with other moronic opinions.

No, what caused my irony meter to break with a loud bang was the lack of reaction from the right. Many on the left felt he should have been arrested for threatening the President. He even received a visit from the Secret Service (just back from Columbia) to see if it was something they should sit on him for. Apparently it wasn’t. But from the right? Crickets chirping. Given the conservative penchant for adulation and worship of all things authoritative, one would expect them to be a tad more respectful to the office of the President. History would tend to support this.

Right. Does anyone remember back in 2003 when the Dixie Chicks said during a concert in Great Britian, about then President Bush,

“Just so you know, we’re on the good side with y’all. We do not want this war, this violence, and we’re ashamed that the President of the United States is from Texas.”

The right wing began to froth at the mouth. Boycotts were called, records 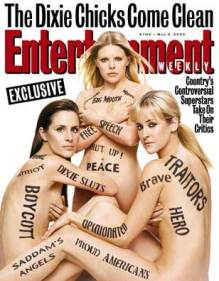 were defaced or burned, and they were chastised in the press. They were called all types of names, many of which found their way onto their nude bodies in their photo shoot for Entertainment Magazine. Even though they had the free speech right to criticize the president, the country music crowd (which is for the most part conservative, Christian and Republican) took extreme umbrage that they would be so disrespectful of a sitting President. How dare they say such things when we were at war, and while in a foreign country no less?

Now my question is, where are those people when Ted Nugent says that the President’s administration is “wiping it’s ass on the Constitution”? You didn’t see that NRA crowd in the video of his comments booing him for his disrespect of the President, our Commander-in-Chief. They clapped and cheered. The same people who wanted to burn the Dixie Chicks in effigy. (and I’m not even going to analyze the difference female artists are accorded by these right wing elements. That’s a whole ‘nother topic for discussion). Why aren’t they all up in arms (literally) when Nugent says such things as

among others. Why aren’t his concerts being boycotted? Why aren’t they being cancelled?

Maybe what goes around finally comes around? The sad thing is that it’s council members in Bangor Maine, and the Army officials at Fort Knox that is canceling Nugent. The right wing, gun-toting authoritative conservatives in the country feel that what’s good for the geese when they criticize the white man in the White House is not necessarily what’s good for the gander, when the gander is criticizing the black man in the White House.

Nugent should stick to black bears.

8 thoughts on “More Blatant Hypocrisy From the Right”