No, this is not my Martin Luther King moment.

Did you ever have a dream from which you awoke that you felt was full of some monumental wisdom, something you never would have thought of in any of your waking moments,  and you felt that you ought to get right up and put the dream to paper, knowing full well if you rolled over and went back to sleep, you’d completely forget it in the morning? And once you do, and you’ve had your second cup of coffee, and you analyze it, you realize it’s not only NOT a very monumental bit of thinking, it’s not even rational, and what made you even think it was so profound?

Well, I had a dream the other night, and though I’ve concluded that it’s not quite that 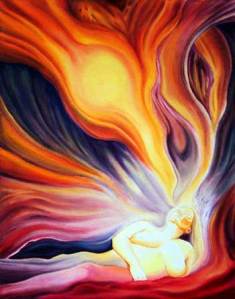 monumental, it does hold the distinction of actually being coherent in the real world, unlike most of my dreams which are more like psychedelic, random, fleeting images and conversations and characters that hold no connection with each other, and have no real significance beyond allowing my brain to release these things from my subconscious, probably something brains are supposed to do when one sleeps. You know; to ease stress, unblock blocked-up synapses, make some sense of the constant input of stimuli, in the process getting rid of the crap, cleaning out the neural pathways.

Anyway, in this dream, I was on a panel on a radio or TV talk show, where there was a Christian and an atheist debating each other, and for some reason I was tasked with coming up with a pertinent question for the theist, something that would make him stop and re-think his theism in light of my question (as if). I was sweating it, because in these type of give-and-takes, all the relevant, thoughtful questions had been asked, so I was wracking my brain to come up with something novel.

Just before it was my turn to ask a question, this one popped into my head:

Why do theists get so upset at the very thought of atheists even existing? Why don’t theists have the same attitude towards atheists as, say, brunettes have towards redheads? You don’t see brunettes threatened by the fact that about 10 percent of the population has ginger hair.  They just accept that there are people with different colored hair, and they live their lives totally unaffected by their existence. Why can’t theists be the same way?”

OK, admittedly, this is not a very profound question, and one that is (I think) quite obvious. It can be extrapolated to other areas of human social culture, such as race relations, gay rights, sexual orientation, etc. It boils down to the human phenomena that we have evolved to be distrustful of “others”; those not like us, and the process of civilization has been partly the history of humanity attempting to overcome this outdated, unneeded response to people who are not like us. No, what I was amazed at was that the premise of the dream actually held true, and made sense once I awoke, and continues to do so. My subconscious was actually processing rational thought, rather than simply shedding itself of unneeded data and stimuli. I wonder if it was the vodka?

So it was a perfectly valid point I made to that fanciful theist in my dream. Why do they get

so upset by atheism? I’m sure that some theist will say I’ve simply posited a straw man, that there are many theists, comfortable in their beliefs, that could care less that we exist. But poll after poll (not to mention a shit load of anecdotes) consistently show a significant majority of Americans who find atheists distasteful – they wouldn’t want their daughter to marry one, nor would they ever vote for one. The same can not be said about brunettes. It’s doubtful that any brunette would object to the marriage of a child to a redhead, and if we ever have another redhead running for President, it would only be noted that Thomas Jefferson was a red head, and that would end any latent ginger bigotry.

I think this dream pulled together thoughts motivated by the recent rejection by COLTS (County of Lackawanna Transit System) of a very simple ad on the side of their buses with one word – ATHEISTS – as too “controversial”. (I still marvel at how something innocuous in my life shows up in my dreams.) Some theists can’t

stomach the idea that atheists even exist. And this honestly perplexes me. I understand the existence of theism. I know why it exists, and I know that at the present time, most people in America subscribe to some version or another of a theist belief system. While I’m sure it’s an unsubstantiated belief system that does more harm than good, it exists, and I know also that most people who subscribe to it are, at a base level, honestly good and well-intentioned people. So why can’t theists treat me like I treat them?

One theory, my favorite at the moment, is that deep down theists know (without admitting to themselves – hence the self-delusional aspect of all religion) that there is something wrong with their beliefs. They know that they rest on shaky ground (one book – that’s it), and if they analyzed their beliefs in a rational way they just might find out that those beliefs are nothing but vapor, dust, fog, a shroud over reality. And that bothers them. It bothers them because in other areas of their life, they use reason and logic, and those disciplines work for them on a regular basis. They learn math and science in school, and know that all

of the conveniences of life are not based on faith. They don’t have faith that their car will start when they turn the key, they know it will start because of experience, science, technology, and that the basic know-how of the American automotive industry for the last 100 years gives them that knowledge. They don’t pray before they turn the key, knowing the car will only start if they do so. (This of course assumes a well maintained car, but that goes without saying. The unreliable clunker probably gets more curses directed at it that prayers.)

Likewise in all other aspects of life. A faith-based view of reality is not what they subscribe to to get through the day – except one day (Sunday) and only part of that day in any event. So deep down they know that if they applied that kind of rigorous knowledge to their faith, their beliefs would not hold up to even minimal scrutiny. They really, really want those faith based beliefs to be true, because the promise of religion is eternal life, happiness after a short, somewhat miserable, stint on this earth, and the ability to rejoin all the people they loved and who died before them. This is heartfelt, but ultimately delusional, and the rest of their lives are constant reminders that it may not be true.

I get a very strong sense that theists are insecure in their beliefs. This may be why they need to have them constantly affirmed, not just by attending mass re-education classes on Sundays, but by forcing their beliefs on others, via legislation along with insertion into public policy. It’s a memetic means of self-preservation.

So, add atheists to the known reality of daily life. Atheists are in-your-face, not-too-subtle, but constant reminders that their faith may rest on a proverbial house of cards, and nothing more.  We are a direct refutation of what they want to be true, and we just may be right. We tickle that bone of doubt. So what is the best way to avoid having to confront this internal dialogue they should be having but are avoiding with a vengeance? Pretend that atheists don’t exist, and if that doesn’t work, convince themselves that we are evil, not worthy of a hearing. Don’t vote for us, don’t let us into your life, pretend we don’t exist, and, maybe if you are lucky, we just might go away.

Naw, that’s not going to happen.

This analogy works with other examples. Right-handers are dominant, yet we have no problem with southpaws. People with glasses are very common, yet we tolerate those with 20/20 vision (perhaps that one should be reversed.) The point is that there are lots of people out there who are different than others, and they don’t get the derision, the avoidance, the bigotry that atheists get. Blacks, gays, women have all had to assert themselves before that were treated as equals, so the fact that atheists are putting up billboards, is not proof that atheist want to get rid of religion, but merely that they want to be accepted as equals. Theists need to accept that we exist, and stop trying to legislate us away.

This rant got a little longer than I anticipated, but that’s good. Maybe I’ll jump up in the middle of the night and write down those dreams more often.

Note to Gideon: I am still not going to allow your comments. They are still juvenile, puerile, and simplistically offensive, not to mention stupid. Let me know when you grow up.