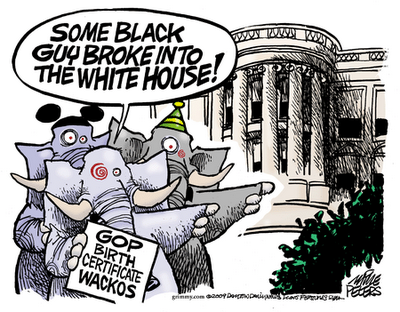 I’m a big fan of hobbies. Everyone should have one. Modern life allows us a lot of free time, and we humans need to be able to fill it with satisfying projects. We don’t have to spend from sun-up to sun-down plowing the fields, then sleeping until the next sun-up, too exhausted to find an avocation to keep our minds busy. Idle hands, idle minds; so a good hobby is a good thing. I have a few myself.

I’ve discovered this past week that there are a lot of people with an odd hobby. It’s called “Hating Obama”, and it occupies a significant amount of their time and energy. One aspect is reflected in the so-called Birther Movement. This movement is exemplified by people who scour the internet for information they can latch onto to continue to feed their “Hate Obama” jones, and one way they do that is by convincing themselves that Obama should never have been allowed to run for election in the first place, because he’s disqualified under the law as a foreigner from holding office. It short, he wasn’t born in the US, they believe, and therefore is disqualified under the Constitution and other supporting legislation from living in the White House.

The operative words up there are “they believe”, because there is not a whole of of facts that support their beliefs, just a lot of speculation surrounding surmised facts, unsupported allegations, and outright falsehoods. A lot of what they believe, they believe because they want to believe it, not because there is anything to support their beliefs. They tend to pick and choose “facts”, mix them all together, and assume the most outrageous scenarios, rather than waiting for facts to develop, or postulating more rational explanations. If they can conclude that Obama is a “fraud” or is hiding his past, or is not who he says he is, they will, because their motivations are at best suspect, and at worst, bigoted. In short, there’s not a lot of rational intelligence being bandied about, just hysterical paranoia.

I’ve been reading and commenting on a blog of one of these people who partakes of this particular hobby, Itooktheredpill. (The title to his blog is a self-delusional red flag in and of itself.)  It started interestingly enough, with a post about a book that George Washington checked out of the library, and never returned (who knew the Father of our Country was so…human?) but degenerated into  tin-foil hat conspiracy notions about Obama. You can read it if it interests you.

What interested me was the claim that Obama’s social security number is another piece of evidence in the notion that he’s not an American born citizen. Apparently his SS# begins with the prefix “042” which according to the Social Security Administration, means that it was issued in Connecticut. Here is the recent controversy set out in all its splendor on the World Nut Daily. Now, if you read the information being reported, you find a number of things:

I did a little checking, and admittedly, I’m not a private investigator. But there are all sorts of very innocent scenarios that could be spun, even if you assume the basic facts to be true – i.e that his SS# was issued out of Connecticut, and that it wasn’t issued until 1977 or thereabouts.

Before 1986, people often did not have a Social Security number until the age of about 14, since they were used for income tracking purposes, and those under that age seldom had substantial income.

This was not changed until 1986. I checked a social security database validation site and discovered that my own SS# was issued in 1965, as was my younger sister’s, at ages 11 and 9 respectively. In addition

The Area Number, the first three digits, is assigned by the geographical region. Prior to 1973, cards were issued in local Social Security offices around the country and the Area Number represented the office code in which the card was issued. This did not necessarily have to be in the area where the applicant lived, since a person could apply for their card in any Social Security office. Since 1973, when SSA began assigning SSNs and issuing cards centrally from Baltimore, the area number assigned has been based on the ZIP code in the mailing address provided on the application for the original Social Security card. The applicant’s mailing address does not have to be the same as their place of residence. Thus, the Area Number does not necessarily represent the State of residence of the applicant, neither prior to 1973, nor since.

So, in 1977, when Obama allegedly obtained a SS# (even though he worked at Baskin Robbins in 1975 without one), a SS# could be obtained by mail, and when it was, the number assigned to it was based on the zip code of the mailing address on application. Prior to that date, it was common to not even obtain a SS# until the working teenage years. Obama was a teenager in Hawaii between 1975 and 1979 (the year he graduated from high school). Again, assuming the accuracy of the reports, he didn’t obtain a SS# until sometime during his high school years, but apparently that’s evidence of fraud, violation of the law (how DID Baskin Robbins report his income to the IRS?) and deception.

Apparently, no teenager in America in the 1970s ever worked part time at a local business establishment and was paid in cash, or even checks unreported to the government. As the Wikipedia article makes clear, the SS# of individuals didn’t become established as personal identifiers until the 1980s. Birthers want to impose a current mindset and understanding of the law on the climate of the 70s. I personally worked in my teens, in the late 60s and early 70s, without reporting any income to the IRS. It was common, widespread, and frankly, perfectly legal back then {wink, wink, nudge, nudge}.

Additionally, if one could obtain a SS# by mail, why is a conspiracy theory that he fraudulently obtained the # more believable than that he or someone in his family used  a Connecticut mailing address for unknown but innocent reasons? 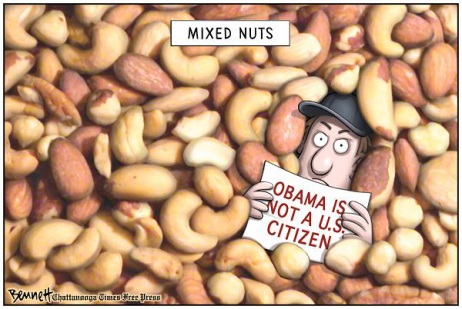 The point here is not that Obama’s social security information was not fraudulently obtained, the point is that there is so much misinformation out there, and so many assumptions being made, all colored with the rose colored glasses of the people who, for some reason, hate Obama so much, they’ll believe anything without any evidence whatsoever, thereby fueling, rather than cooling, their irrational hatred. They have made it a hobby to look for reasons to support their preconceived assumptions. Facts like this, and this, and the following

“The president was, in fact, born at Kapi’olani Hospital in Honolulu, Hawaii,” she said on air. “And that’s just a fact.”

are ignored. If you send them to snopes, you’re told that snopes is a liberal site and can’t be relied on. (WTF?) I guess Factcheck.org is run by Communists? So if there is evidence that contradicts them, it’s part of the conspiracy. If it supports them, it’s swallowed with eagerness. They get shot down on all fronts, so they try something new. Voila! The Connecticut SS#. And they keep insisting with every new angle they concoct that Obama somehow has the duty to refute them.

No, that’s not how burden of proof works.

I made the point to Mr. Red Pill that this type of thinking is explained by their religious background, (not to mention an almost pathological reliance on Fox News).  I can’t say that they’re all religious (I have my opinions as to what a proper study would show) but he’s a fervent Christian who had to make a point that Jesus loves me even though I “spit in his face“. I pointed out that those who use faith to obtain their knowledge tend to believe anything, even patent nonsense. One of the reasons for this is that the religious mindset accepts conclusions first, usually due to some emotional response to outside stimuli, (can you spell R-A-C-I-S-M?) then searches for evidence to back up those conclusions. Religion does this all the time, indeed it is the hallmark of its thinking. Look at the creationist/evolution controversy.

From my vantage point, it’s clear that Mr. Red Pill, and all the other birthers, are colorblind, because they actually took the blue pill.

9 thoughts on “A Really Dumb Hobby”